History of the 69th

and
The Irish Brigade

In the spring of 1861, Colonel Michael Corcoran, an Irishman commanding the 69th New York State Militia, was in the process of being court-martialed by the state for refusing to parade his regiment before the visiting Prince of Wales in New York City. While he waited, Confederate forces fired upon Fort Sumter and the Civil War began. Needing every available man, the state dropped the charges and Corcoran led his men to Virginia and the Battle of First Bull Run.

Although the battle was a Union defeat, the 69th N.Y.S.M. served gallantly and provided a strong rear guard during the retreat to Washington.

Unfortunately, among the casualties was Colonel Corcoran, who was captured and spent about a year in a Confederate prison before being paroled. 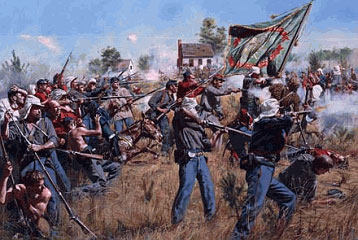 After Bull Run and President Lincoln’s call for 300,000 men to quell the rebellion; Captain Thomas Francis Meagher of the 69th N.Y.S.M.’s Company K, (who was an agitator for Irish independence and had been transported to Tasmania by the English for his part in the Irish Rebellion of 1848 but had escaped and made his way to New York) decided to create a purely ethnic Irish brigade with the newly formed 69th New York State Volunteers, commanded by Colonel Robert Nugent, as its core regiment.

As the 69th Volunteers were the first regiment to reach it’s quota of men, with many joining from the old 69th Militia, it was designated the First Regiment of the Irish Brigade and was joined in November 1861 by the 63rd and the 88th New York Regiments at Camp California near Alexandria, Virginia.

These regiments were made up mainly of the poor and working class immigrant Irishmen, some fresh  “off the boat”, who were trying to create a new life for themselves in their adopted country.

They enlisted for many reasons. Some joined out of patriotic fervor to help preserve the Union, for Old Ireland and New America, some joined to gain military knowledge to take back to Ireland to fight the English and gain Irish independence, some just enlisted for the chance of regular pay and food in hard economic times, or later in the war, for the large bounties that were offered and could reach as much as $700, which was about ten years wages for a laborer back in Ireland, and some just joined for the craic, for the fun of it and a chance for some adventure and excitement.

But not many joined up to free the slaves; as the freed blacks who would come north would be in direct competition with the Catholic Irish who were at the bottom of the social / economic ladder in a predominantly Protestant and, some would say, anti-immigrant America.

As 1861 came to an end and the newly formed regiments went into winter camp, the Union army was reorganized and the Irish Brigade became the 2nd Brigade, 1st Division, 2nd Corps of the Army of the Potomac.

Over the course of the war the 69th and the Irish Brigade fought with distinction in every campaign of the Army of the Potomac, all too often with devastating consequences.

During the spring of 1862 they were heavily involved in the Peninsular Campaign and the Seven Days Battles, where they gained a reputation as fierce fighters at Fair Oaks Station and Malvern Hill and helped provided a solid rear guard for the whole army during the retreats to the James River.

It has been said that it was Confederate General Robert E. Lee, after enquiring about the green flag he saw in the Union ranks at Malvern Hill, and being told it belonged to the 69th New York, allegedly stated, “Ah yes..that Fighting 69th.” The nickname stuck and the Regiment has carried it proudly ever since.

In June 1862 the Brigade was strengthened when it was joined by a new regiment, the 29th Massachusetts.

On September 17th 1862, at the Battle of Antietam, still mainly armed with .69 smooth bore muskets, firing “buck and ball”, and rallying to General Meagher’s cry of  ”Raise the colors, boys, and follow me!” the Brigade assaulted the Sunken Road taking heavy losses, with the 69th loosing about 60% of their numbers.

Gen. Meagher was injured when his horse was shot from beneath him, but the Brigade held its ground on the field until relieved by General Caldwell’s brigade.

After Antietam the Brigade camped near Harpers Ferry where it was refitted and was joined in October by it’s fifth regiment, the 116th Pennsylvania. While not wholly Irish by any means, many were of Dutch origin, the men of the 116th were a welcome addition to the ranks of the Brigade.

Just before the Battle of Fredericksburg the 29th Massachusetts was replaced by the 28th Massachusetts, and it was the 28th who, on December 13th 1862, carried the only green regimental flag as the Irish Brigade charged up the hill and into the mouths of the Confederate muskets and artillery on Marye’s Heights.

The battle was a disaster for the Union and particularly for the Irish Brigade, who suffered terrible casualties. After the battle only about 260 out of 1200 men of the Brigade were still able to fight. 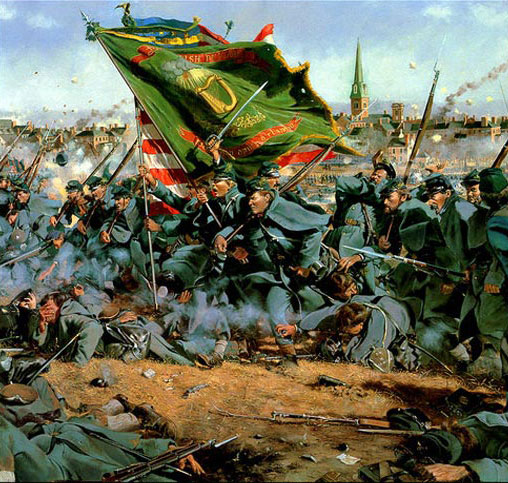 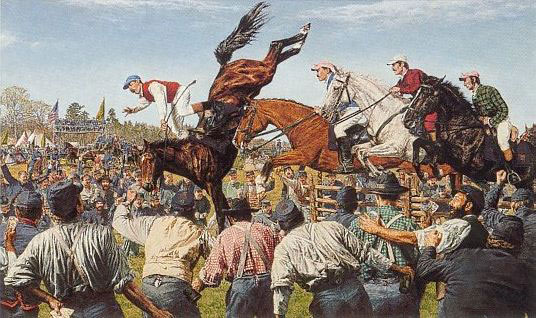 In March 1863 the Irish Brigade celebrated St Patrick’s Day with a military Mass, a steeplechase, foot races and various other competitions for enlisted men with cash prizes for the winners. There was music, singing and dancing, poetry recitals and a theatrical production given for the enjoyment of the men and the many high-ranking officers and guests who had been invited.

It was a day that was remembered by many as the best non-combative day of the war and the Irish Brigade’s St. Patrick’s Day celebrations became a much-anticipated event for the remaining years of the conflict.

fter the debacle and Union rout at the Battle of Chancellorsville in May 1863, General Meagher requested new recruits for his decimated Brigade. Unfortunately his request was denied and so he reluctantly resigned his commission in protest.

On July 2nd, at the Battle Gettysburg, the Irish Brigade could only field about 600 men under the command of Col. Patrick Kelly and although the 69th had 107 men on it’s roster, only 75 were able to join the fray. Just prior to going into battle Fr. William Corby of the 63rd New York gave a general absolution to the whole Brigade, who once again distinguished itself in the fight at the Wheatfield, Rose Woods and at the Stoney Hill, over running  Rebel positions and taking many prisoners until being forced to pull back.

During the battle the 69th lost 25 men, killed, wounded or captured and could now only field the equivalent of half a regular company.

During the winter of 1863 the Brigade did some recruiting and by the spring of 1864 it was almost at full strength again, although the new recruits were untested in battle and were not of quite the same caliber or character as the veterans who had endured so much for the past two and a half years.

During the 1864 spring campaigns the casualties suffered at the battles of the Wilderness, Spotsylvania, Cold Harbor and the Siege of Petersburg once again decimated the ranks of the 69th and the Irish Brigade and by the end of June the Brigade was again down to only regimental strength. 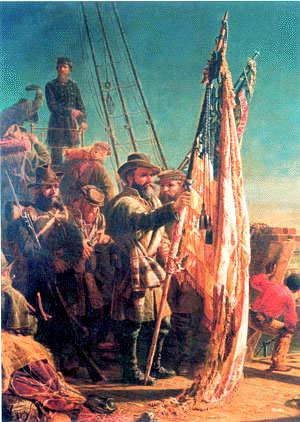 Because of the lack of numbers the Irish Brigade was disbanded, with the New York regiments being formed into the Consolidated Brigade along with six other small regiments and the 28th Massachusetts and the 116th Pennsylvania being sent to other brigades within the 2nd Corps.

But later that year, after some more heavy recruiting the Irish Brigade was reformed, with the original three New York regiments and the 28th Massachusetts, under the command of Colonel Robert Nugent.

In place of the 116th Pennsylvania the Brigade was joined by the 7th New York Heavy Artillery, a large regiment that helped to swell the Brigade’s ranks and it was these regiments that served gallantly through the early spring of 1865 and the remaining battles and skirmishes of the war and saw Lee’s surrender on April 9th at Appomattox Court House and victory for the Union.

On April 11th, their service to the Union now complete, the 69th and the Irish Brigade began the long march home. On May 22nd they were in Washington to parade proudly down Pennsylvania Avenue in the Grand Review, sprigs of green boxwood in their caps in remembrance of Fredericksburg.

On June 2nd they finally arrived back in New York where the 1st Division of the New York State National Guard escorted them through the city center.

The remaining 400 men of the 69th, 63rd and 88th New York then marched to Irving Hall, where they were met by General Meagher, who gave a short but rousing speech in their honor, after which Brevet Brigadier General Robert Nugent brought his men to attention and, “ Marched them out of the hall and into the rest of their lives….and history.”  (Bilby)

Although the Irish Brigade was disbanded after the war, the 69th New York Regiment saw action in both World War I and World War II and still serves with distinction as the 69th Infantry (Light) New York National Guard.

Members of the regiment were some of the first responders to the 9-11 attacks in New York City, loosing two of it’s personnel. The regiment also saw action between 2004 and 2009 in Operation Iraqi Freedom and Operation Enduring Freedom in Afghanistan where, sadly, once more, twenty three gallant members made the ultimate sacrifice for freedom.

In remembrance of all those who have fought and died in the storied ranks of the Irish Brigade.
May their memories be forever green