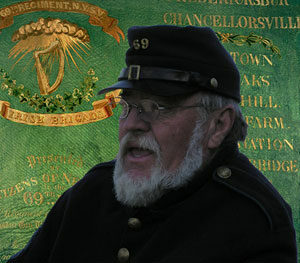 We miss you Skip,

You are in our hearts forever

The 69th NYSV lost a dear friend the during the 2005 season. Skip was a good man and a great friend to everyone he met. Skip left a great void in our camp, but left us with love in our hearts. we will always remember our friend Skip….”
… we will never forget you. Rest in Peace. 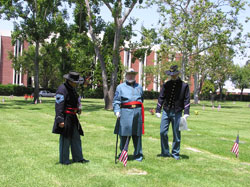 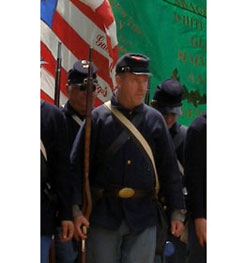 Tommy was a member of the 69th NYSV Co. C for just over three years, receiving his 3 year stripes at Prado in April 2008. Previous to joining the 69th he reenacted with the 20th Maine for a while and prior to that Tommy proudly served his country as a United States Marine.

A devout family man, Tommy was quiet and a little shy but very much the gentleman and always willing to offer advice to the ‘fresh fish’ in the ranks, and even though he was quiet he was always up for a bit of fun in camp or a joke or two around the campfire.

Nina, Tommy’s wife, wrote, “He loved reenacting so much and really enjoyed the 69th New York. He had such a great time that I think he actually convinced himself that he was Irish. He had the worst accent I have ever heard but he loved it.” Tommy was diagnosed with pancreatic cancer in 2010. Nina also wrote, “You would have been proud of him if you saw how hard he fought this disease and never complained. …..Now he is finished fighting and preparing to meet God. He says he will be guarding the Pearly Gates, so he will be there to greet each of us.”

Tommy will be greatly missed by all who knew him.